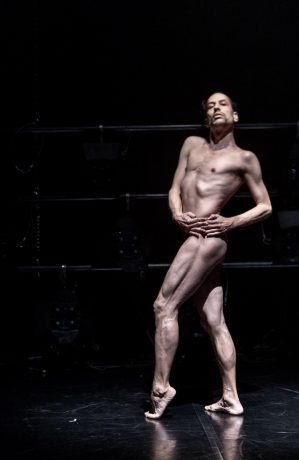 Bony, edgy, twisted. Writhing endlessly in the gap between pleasure and pain, eroticism and death, Egon Schiele’s pictures depict the existential crisis of the subject in times of great turmoil, while voyeuristically exposing the human body in strange poses. The focus here is the male nude; in Schiele’s works, he appears as an androgynous and tortured being, often a symbol of the Passion of Christ in the tradition of the medieval pietà. Ferenc Fehér alludes to Schiele’s anatomical alienation and fragmentation, which is an expression of the disintegration of the individual. He enacts the painter in a bizarre cross between martyr, prophet and redeemer.

The dancer and choreographer Ferenc Fehér is a young rebel of the Hungarian dance scene. As an autodidact, he has developed an unmistakable style that fuses elements of street dance and the martial arts with everyday movement and traditional dance. His solo Schiele was commissioned by the EISFABRIK Hannover and premiered at the tanzOFFensive festival 2020.